This is a brief summary of the presentation by Kevin Rogers on “Did Paul Hijack Christianity?” given to Reasonable Faith Adelaide on the 29th of May 2014. The presentation was partially in response to Laurie Eddie’s talk on “The Origins of Christianity” on the 24th of October 2013 (see https://reasonablefaithadelaide.org.au/the-true-origins-of-christianity-a-sceptical-view/). This summary does not address the issues that Laurie raised. The response to Laurie is included in the video of the full presentation and discussion, which is available on You Tube. See also the Power Point Slides for the full presentation of Did Paul Hijack Christianity?

Many sceptics have argued that Christianity, as we know it, is not a direct reflection of the person and teachings of Jesus of Nazareth, but is a distortion and creation of the apostle Paul. It is said that the early followers of Jesus believed that he was a great teacher, but that it was Paul who transformed the human Jesus into the divine Christ who was the atonement for our sins. 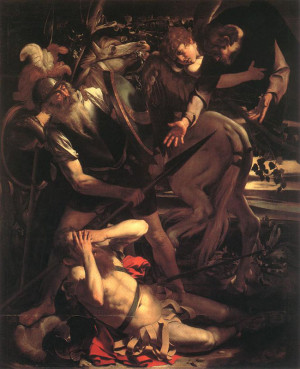 The Conversion of Paul by Carravaggio (1600)

There is no doubt that Paul has had an enormous influence on Christianity. About 30% of the New Testament is either about Paul or written by Paul. The issues are:

Firstly I will present some of the arguments that are used to support the contention that Paul is the creator of the divine Christ.

The letter from James may be one of the earliest books in the New Testament and it was supposedly written by James the brother of Jesus who also became the leader of the Jewish church in Jerusalem. However, the letter from James contains no information about the life of Jesus. In fact, it only mentions Jesus twice. It mainly contains ethical teaching that is similar to the Sermon on the Mount. This tempts us to ask, “Was Jesus initially just considered a great teacher rather than son of God or Messiah?”

Compared with the gospels, there is very little in Paul’s letters regarding Jesus’ life or ministry. Thus Paul often is accused of being neither knowledgeable nor interested in Jesus’ life. Rather, he seems more interested in Jesus’ theological significance and Christian belief and practice. One passage that could be used to support this view is where Paul says, “Therefore from now on we recognize no one according to the flesh; even though we have known Christ according to the flesh, yet now we know Him in this way no longer”. (2 Corinthians 5:16)

Some people also criticise Paul for some of his extensions to Jesus’ ethical teachings as recorded in the gospels. For instance, Paul reinforces the Old Testament negative view on homosexuality and also teaches specific roles for men and women. These views are currently unpopular and are deemed politically incorrect. Also these particular views are not explicitly mentioned by Jesus. Thus Paul is accused of adding ethical teachings that are inconsistent with Jesus.

Before considering counter arguments I will remind readers of the structure of the New Testament.

The 4 gospels contain narrative information about Jesus’ birth, ministry, teaching, crucifixion, resurrection and ascension. Acts is a narrative of the life of the early church after Jesus’ ascension for the next 30 years and the last half is mainly devoted to Paul’s activities. The 4 gospels are called Matthew, Mark, Luke and John. Matthew, Mark and Luke are called the “synoptic” gospels because they see together. They share common material and sometimes their verbal agreement is exact. The common view is that Matthew and Luke had access to Mark and used some of his material, but Matthew and Luke also have common material that is not in Mark. Thus scholars believe there was another document (Q = Quelle, which is German for “source”) that Matthew and Luke had access to. Q is considered very early and predates Paul’s letters. Matthew and Luke also had their independent sources (M & L) and John was probably independent of the synoptic gospels. 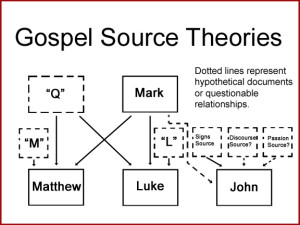 Sceptics usually promote a late dating for the gospels. They often claim that all 4 gospels were written after 70 AD, well after Paul’s death. Supposedly this would have given time for Paul’s version of Christianity to be incorporated into the gospels. However, there are very good reasons for believing that at least Mark and Luke were written much earlier than this.

Acts is a sequel to Luke and Luke uses material from Mark. Thus the sequence of these 3 books is Mark, Luke and then Acts. However, Acts finishes abruptly in 62 AD with Paul under house arrest as follows:

For two whole years Paul stayed there in his own rented house and welcomed all who came to see him. Boldly and without hindrance he preached the kingdom of God and taught about the Lord Jesus Christ. (Acts 28: 30-32)

What happened after that? In fact, there were quite a lot of significant events:

Did Paul have a significant impact on the 4 gospels? There is certainly a link between Luke and Paul. Luke accompanied Paul during the latter part of his missionary journeys. Irenaeus also claims, “Luke, Paul’s associate, also set down in a book the gospel that Paul used to preach.” For instance, Luke’s account of the Last Supper is very similar to Paul’s account in 1 Corinthians 11. However, it is likely that Luke was in Jerusalem between 57 AD and 59 AD while Paul was imprisoned at Caesarea. During this time he probably conducted his investigation for the material that he used in his gospel. Thus much of Luke’s material is not dependent on Paul.

There were tensions between Paul and the church in Jerusalem, but what were these tensions?  The initial followers of Jesus were almost completely Jewish and were considered part of the Jewish culture and faith. The church in Jerusalem saw Jesus as the fulfilment of Jewish hopes. They saw themselves as having continuity with the Jewish faith and other Jews regarded them as a Jewish sect. They continued to worship in the Jewish temple and early evangelism only targeted Jews. When persecution arose, the Hellenistic Christians were scattered and started spreading the gospel to Samaritans and then to gentiles. This was extremely radical at the time. As gentiles came into the church, a number of issues arose, such as:

However, there is no evidence that there was an issue regarding the claim that Jesus was Messiah, Son of God or Lord. However, is there solid positive evidence that the Jerusalem church believed in the divine Christ?

The letter to the Hebrews is relevant to this discussion. The writer does not mention his own name although he was known to his readers at that time. In the 2nd century Irenaeus admits that by then no one knew who wrote this letter. However, it was written by a Jew to the Jews in Jerusalem and it was not written by Paul. It was written prior to the Jewish wars (66-70 AD), as priestly sacrifices were still being offered in the temple. Its early date means that it was independent of Paul. However, it commences as follows:

“In the past God spoke to our ancestors through the prophets at many times and in various ways, but in these last days he has spoken to us by his Son, whom he appointed heir of all things, and through whom also he made the universe. The Son is the radiance of God’s glory and the exact representation of his being, sustaining all things by his powerful word. After he had provided purification for sins, he sat down at the right hand of the Majesty in heaven” (Hebrews 1:1-3).

This clearly claims a very high view of Jesus. Hebrews also strongly affirms that Jesus was the atonement for our sins. Thus the divine nature of Jesus and the theology of the atonement were taught in the early Jerusalem church and these teachings are not invented by Paul.

Thus, Paul did have a significant knowledge of Jesus’ life and ministry.

There are 8 other New Testament letters that were not written by Paul. None of these letters contain narrative information about Jesus. That was not their purpose. Their purpose was to address issues regarding theological understanding and Christian practice and they presumed a prior knowledge about Jesus. In general they are similar to Paul’s letters, but they were written independently of Paul and demonstrate that Paul did not pull Christianity into a significantly different direction.

There is no doubt that Paul is highly significant and has had an enormous impact on the development of Christianity and consequently on the whole world. Paul was doubtless an outstanding missionary and established many churches. However, his significance should not be exaggerated. There were obviously many others who were spreading the gospel and establishing churches all over the Roman Empire at the same time as Paul. Many of these people are now unknown to us. The significant thing about Paul is that we have a written record of his acts and his letters.

Paul was formerly a zealous Pharisee and student of the Old Testament and Jewish traditions. He did not believe in Jesus and persecuted the Church. Even though we have no evidence that Paul had seen Jesus in the flesh, he obviously had a great deal of knowledge about Jesus and this new Jewish sect. However, he claims that he received a revelation of Christ on the road to Damascus. This forced him to radically revise his understanding of the Old Testament. He based much of his theology on his interpretation of the Old Testament and his claimed revelation from Christ.

Paul was always very much a Jew and saw the whole ministry of Jesus through Jewish eyes. Although he was a highly educated man who was aware of Greek philosophy, it is highly implausible that he would have sought inspiration from pagan sources. Paul did not have first-hand knowledge of Jesus’ life. He had significant contact with the apostles and with members of Jesus’ family but his information was 2nd hand, even though it is better than ours. We have to rely on the testimony of other New Testament witnesses for this information.

The gospels were written within the context of Jesus’ life at that time. They proclaim a progressive revelation of the person of Jesus. It is the letters that disclose the significance of Jesus’ life. Most of the gospels were probably written concurrently with Paul’s letters. They were written from different locations and so it is highly likely that the gospels and Paul’s letters are largely independent. Although Luke was closely associated with Paul, it seems as though he conducted an independent investigation and got most of his gospel information from other sources.

The New Testament is a collection of documents written by different authors from different locations throughout the Roman Empire. We can read the whole of the New Testament, but we are in a relatively privileged position. Paul did not take a photocopy of his letters prior to sending them. It took many years for his letters to be copied and disseminated to other churches. The same applies to all other books in the New Testament. Nobody within the 1st century had visibility of all of the New Testament documents. Thus we have a bird’s eye view that was never available to any person within the 1st century. Thus it is impossible that a single person could exert monolithic control of such a diverse movement. If Paul deviated from other movements within early Christianity then it should be clearly visible within the New Testament collection; but it is not. What you see in the New Testament is what you get. There is no conspiracy to trick you. It is a collection of books written by different authors that provides us with their view of Jesus of Nazareth and his significance to us.