Cosmic Mythology – Exposing the Big Bang as Philosophy not Science

Exposing the Big Bang as Philosophy not Science

Christians are divided on the issue of evolution and the age of the earth. During the first half of 2014 there will be a number of meetings that will cover aspects of this issue and various speakers will be given the opportunity to present their views. Reasonable Faith Adelaide does not currently endorse any particular view. We are a house divided and are a work in progress. However, we acknowledge that this is an enormous issue that thinking Christians should not ignore. It is also up to you to question, challenge and form your own opinions.

On Thursday, the 20th of February, Dr John Hartnett presented a critique of Big Bang Cosmology. John is an advocate of the Young Earth Creationist (YEC) position and is a frequent contributor to Creation Ministries International (CMI) publications, e.g., the Creation Magazine. He is also an associate professor of Physics at Adelaide University. He is the author of “Starlight, Time and the New Physics” and “Dismantling the Big Bang: God’s Universe Rediscovered”, and has also published numerous papers on physics secular peer reviewed journals.

John has provided the following synopsis:

The history of the development of the standard big bang cosmology is described and understood in terms of its philosophical underpinnings. The Cosmological Principle is explained as the major and essential assumption upon which it all depends. Due to this it has been required to invent unknown stuff, such as the expansion of space, Dark Energy, Dark Matter, CMB radiation as afterglow of Big Bang, and Inflation. None of these are experimentally observed in the lab. Yet all of these are needed, else the standard LCDM model utterly fails. Though we hear for the first time those speaking of discarding the standard model, they have built themselves a modern-day tower of Babel, an edifice of a structure that must be supported at all costs, especially since in 2011 the Nobel Prize was awarded for the accelerating universe driven by the unknown stuff of science fiction—Dark Energy. Think about it, all of the evidence for cosmological expansion comes from the cosmos itself. There is no independent method to determine if space is expanding. It cannot be experimentally verified in the local lab. So the evidence must be accepted on faith to some extent, which makes the argument much weaker. Cosmology then is not a science subject to the same experimental rigor that we expect of the repeatable science done in a laboratory today. Look how ludicrous the so-called ‘science’ has become with the invention of ‘unknowns’ to explain the unknowns. Therefore the philosophical nature of the cosmology leads to it being correctly described as, not science at all, but an atheistic belief system.

See John’s Power Point slides on Cosmic Mythology. A video record of his talk and subsequent discussion is provided on You Tube. 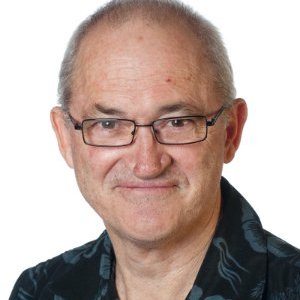 Associate Professor John Hartnett received both his B.Sc. (hons) and PhD with distinction from the School of Physics at the University of Western Australia. He is currently employed as an ARC Discovery Outstanding Researcher Award (DORA) Fellow at the University of Adelaide, in the Institute of Photonics and Advanced Sensing (IPAS) and the School of Chemistry and Physics. His research interests include ultra-high stability cryogenic microwave oscillators based on pure sapphire resonators, ultra-stable cryogenic optical cavities and tests of fundamental theories of physics and their cosmological implications. He has an interest in the large scale structure of the universe that shows periodic structure1 and in alternate cosmologies that do not require dark matter and dark energy.2 He holds to a biblical creationist worldview and has developed and continues to develop cosmogonies that are faithful to biblical text. He authored “Starlight, Time and the New Physics” and “Dismantling the Big Bang: God’s Universe Rediscovered” (co-authored with Alex Williams). He is the 2010 recipient of the IEEE UFFC Society W.G. Cady award. He has published more than 100 papers in scientific journals and book chapters.