The Principle of Sufficient Reason

Why does anything at all exist? Why is there something rather than nothing? These were the questions that Gottfried Wilhelm Leibniz (1646-1716) raised, and from them he developed an argument for the existence of God based on the Principle of Sufficient Reason (PSR). The PSR is one form of various cosmological arguments. 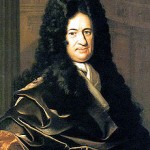 Leibniz was a German mathematician and philosopher. In mathematics, he was the co-inventor (with Isaac Newton) of calculus, the first inventor of a mechanical calculator and the inventor of the binary number system. In philosophy, he suggested that we live in the “best of all possible worlds”, he was a key thinker in the development of rationalism and also a forerunner of modern logic and analytic philosophy. In his latter years, he fell out of favour due to disputes with Newton on whether he had copied Newton’s ideas on calculus. His writings were largely forgotten, but were revived in the 20th century, and he is now highly regarded.

Leibniz’s argument consists of 3 premises and 2 conclusions, as follows:

In this article, I will work backwards. I will firstly discuss the logical structure of the argument (its validity) and then consider the premises. We will firstly assume that the premises are true and verify whether the conclusions follow from the premises.

Conclusion 1 is justified by Premise 1 and 3 as follows:

Conclusion 2 follows from premise 2 and conclusion 1 as follows:

I think it is fairly self-evident that the logical structure of the argument is valid. Now we will look at the premises.

Premise 3 states that the universe exists. I think this is fairly self-evident. I am sure that there have been extreme sceptics that have questioned this claim, but I will not concern myself with them.

Premise 1 states that everything that exists has an explanation of its existence. This has prompted the following objection:

However, this objection is a misunderstanding of what Leibniz meant by “explanation”. According to Leibniz, there are 2 kinds of explanations:

Necessary beings are those that exist by a necessity of their own nature. In other words it is impossible for them not to exist. Some mathematicians believe that abstract mathematical objects, such as numbers, sets and shapes (e.g. circles and triangles) exist necessarily. Necessary beings are not caused to exist by an external entity and necessarily exist in all possible worlds.

On the other hand, contingent beings are caused to exist by something else. They do not exist necessarily and exist because something else produced them. This includes physical objects such as people, planets and galaxies. It is easy to imagine possible worlds in which these objects do not exist. Thus we could expand premise 1 as follows:

Premise 1: Everything that exists has an explanation of its existence, either due to the necessity of its own nature or due to an external cause.

It is impossible for God to have a cause. Thus Leibniz’s argument is really for a God who must be a necessary, uncaused being. Thus the argument helps to define and constrain what we mean by “God”.

Some atheists have objected that premise 1 is true of everything in the universe, but not the universe itself. However, it is arbitrary to claim that the universe is an exception. After all, even Leibniz did not exclude God from premise 1.

Some atheists have suggested that it is impossible for the universe to have an explanation of its existence. Their argument goes something like this:

The explanation of the universe would have to be a prior state of affairs in which the universe did not exist. This would be nothingness. Nothingness cannot cause anything, Therefore the universe exists inexplicably.

One may object at this point that the word “explanation” is ambiguous. An explanation for something may be due to either an intelligent agent or a mindless, unintelligent prior event or cause. For example, suppose we have a rusty car. The existence of the car was due to intelligent agents, but the rusty degradation was due to mindless, unintelligent causes. If the ultimate explanation of the universe is mindless and unintelligent, then the argument does not take us very far. However, could the existence of the universe be ultimately due to mindless causes?

However, I don’t think that the LCA necessarily demands that the observable universe has an intelligent explanation of its existence. For example, suppose that this universe was birthed by some other universe. Well, that other universe would be the explanation of its existence. Of course, that would simply push the problem back one step further. Even if an atheist wants to appeal to an infinite past succession of universes, we can still ask of that infinite succession, “Why does it exist, rather than nothing and what is its explanation?” But at that point, what kind of explanation can there be other than some transcendent, necessary cause? So a rational atheist is forced to either concede the argument or claim that the cosmos exists inexplicably (without explanation).

Leibniz’s argument from the Principle of sufficient reason is an interesting argument for the existence of God, but it goes beyond just God’s existence. It also constrains the attributes of God to be a transcendent, uncaused, unembodied mind, who necessarily exists. In other words, this being is what the major monotheistic religions traditionally refer to as “God”.