David Hume (1711-1776) was an important figure in the Scottish Enlightenment. He was a sceptic and is noted for his arguments against the cosmological and teleological arguments for the existence of God.

His article “On Miracles”  in chapter 10 of “An Enquiry Concerning Human Understanding” (published in 1748) has also been highly influential. Chapter 10 can be found at:

The conclusion of his article on miracles is that no amount of historical evidence can warrant belief in a miracle. To quote Hume from section 87, “I flatter myself that I have discovered an argument of a like nature, which, if just, will, with the wise and learned, be an everlasting check to all kinds of superstitious delusion, and consequently, will be useful as long as the world endures.”

Hume’s first and primary argument is:

Hume’s ultimate target is the New Testament miracles, especially Jesus’ resurrection. However, he does not attack them directly, but uses indirect arguments. Hume is not saying that miracles are impossible and do not happen. What he is saying is that the evidence will always be insufficient to warrant belief.

It has been said that one of the problems with Hume is that he was born before Bayes’ Theorem. He wrote at a time when the mathematics of probability was in its infancy. Thus his argument is qualitative rather than quantitative. By a strange coincidence, Bayes’ Theorem was proposed by Thomas Bayes (1702-1761), who was a British mathematician and a Presbyterian minister. Bayes’ Theorem can be stated as P(A/B) = P(B/A) * P(A) / P(B), where P(A/B) means the probability that A will occur given that event B has already occurred. Bayes’ Theorem is most easily understood by an example. I have taken this example from Wikipedia, but altered it slightly to reflect modern trends.

P(B/A) is that probability that a student is wearing trousers given that the student is a girl, which is 0.5 or 50%.

This can be verified by the following table:

Now I will apply Bayes’ Theorem to miracles.

3      Application of Bayes’ Theorem to Miracles

People tell the truth most of the time but occasionally what they say is wrong, either deliberately or unintentionally. Let us be uncharitable and denote an incorrect report by the event L (for Lie), and let T be a true report. Therefore, P(T)  = 1 – P(L).

P(M) is the probability that the miracle occurred in the first place.

For the purpose of this example, I will adopt Hume’s assumptions on probabilities, although I will argue against them later. Hume argues that a miracle, by nature of the case, is highly improbable just based on the relative frequency of occurrence. Thus P(M) is a very small positive number. Hume would argue that there is at most one person who has risen from the dead (the rest being resuscitations). Thus, as far as the resurrection is concerned, P(M) is approximately 10-10 (based approximately on the total number of people who have existed during recorded history). Hume allows that people tell the truth much more often than not. So let us be generous (like Hume) and suppose that people lie less than 1% of the time. Then the application of Bayes’ Theorem yields P(M/R) = 9.9*10-9, which is a very small number. So Hume seems to be right. If a single witness reported that a random person was raised from the dead, then it is highly improbable that the event actually occurred. This is Hume’s core argument that the improbability of a miracle outweighs the reliability of human testimony.

However, what if multiple (n) independent witnesses reported the same event? The probability that they were all lying is P(L)n, which I will denote as Pn(L), which becomes vanishingly small as n increases. Conversely, Pn(T) asymptotes to 1 as n increases.

Another problem with David Hume was that he was born before Microsoft Excel. The following graph shows a plot of the probability that the miracle actually occurred against the number of independent witnesses (for the assumed values of P(M) and P(L)). 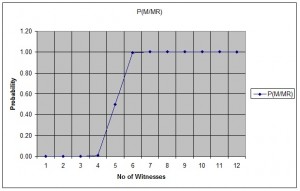 Probability versus number of witnesses

For this example, a wise man would believe that the miracle occurred if there were more than 5 independent witnesses.

You can argue all you like about appropriate values for P(M) and P(L). However, provided P(M) is non-zero there is always a value for the number of witnesses above which it would be wise to believe the report.

What I am saying is only common sense. It is something that is happening in our courts every day. There is a low probability that a random individual has committed a crime, but the weight of evidence may still be sufficient to secure a conviction beyond reasonable doubt.

4      The Probability of Miracles

In chapter 90 Hume states, “A miracle is a violation of the laws of nature; and as a firm and unalterable experience has established these laws, the proof against a miracle, from the very nature of the fact, is as entire as any argument from experience can possibly be imagined.” From this Hume seems to be implying:

However something smells about this argument. It simply illustrates that the term “miracle” can be defined in such a manner as to be logically incoherent, such as a “married bachelor”. On the contrary, the above argument could be modified as follows:

Hume also seems to assign probabilities just based on relative frequencies. However, this approach is simplistic. For example, more people die from playing lawn bowls than from hang-gliding. Does that make lawn bowls a more dangerous sport? The context (e.g., age of participants) will affect the probability. In the same manner, the probability of Jesus’ resurrection should not be based just on relative frequencies. It will be affected by background issues/beliefs, such as whether God exists and if He is interested in us. In this case, a person may well believe that P(M) is much greater than 10-10.

Hume’s second argument is that no miracle has been attested by a sufficient number of reliable witnesses. In paragraph 92 Hume states, “For first, there is not to be found, in all history, any miracle attested by a sufficient number of men, of such unquestioned good-sense, education, and learning, as to secure us against all delusion in themselves; of such undoubted integrity, as to place them beyond all suspicion of any design to deceive others; of such credit and reputation in the eyes of mankind, as to have a great deal to lose in case of their being detected in any falsehood; and at the same time, attesting facts performed in such a public manner and in so celebrated a part of the world, as to render the detection unavoidable: All which circumstances are requisite to give us a full assurance in the testimony of men.”

A couple of comments can be made on this argument.

In his final section Hume claims that there are competing and conflicting historical miracle claims that essentially defeat one another. He cites a number of examples. I have not space to consider them all, but I will only discuss the example of the Roman emperor Vespasian. Hume states in section 96, “One of the best attested miracles in all profane history, is that which Tacitus reports of Vespasian, who cured a blind man in Alexandria, by means of his spittle, and a lame man by the mere touch of his foot; in obedience to a vision of the god Serapis, who had enjoined them to have recourse to the Emperor, for these miraculous cures.”

There are 2 issues with this example:

Vespasian (9AD to 79AD) led the Roman army in subjugating the Jewish rebellion in 66AD. He became emperor in 69AD. While in Alexandria in Egypt in 69 AD Vespasian is purported to have healed a blind man and a lame man. These miraculous events were reported by the Roman historians:

Hence we have 3 records by credible historians. Tacitus even records, “Persons actually present attest both facts, even now when nothing is to be gained by falsehood.” Most historians agree that something unusual happened. However, there are causes for doubt. Tacitus elsewhere records that he did not believe it was a miracle and that he believed that the healings occurred by natural means. Dio Cassius records that the Alexandrians were unimpressed.

The Roman emperors were purported to be divine figures and any miraculous associations assisted an aspirant in obtaining power. Modern historians surmise that it was a setup by Vespasian’s followers to enhance his aspirations for power. If we consider P(M) and P(L), we discover things are not so good. The Egyptian god Serapis has long since packed his bags and departed from public interest. So a coherent basis for the miracles is lacking. Thus P(M) is inordinately low. The historians were probably honest in their 2nd hand reports of the stories but the promoters and witnesses at the time had a strong motivation for a positive account. Thus P(L) is high and the witnesses were probably not independent. So, do I believe it? Probably not.

The other issue is whether this is a conflicting miracle claim. In Matthew 24:24 Jesus is reported to say, “False Christs and false prophets will appear and perform great signs and miracles to deceive even the elect — if that were possible.” This opens the possibility for miracles originating from “profane” sources.

Doubtless there have been many spurious claims regarding miracles. However, if 2 miraculous claims are inherently incompatible then at least one of them must lack sufficient evidence, but the fact that they conflict does not mean that both claims are false.

Hume states, “A wise man proportions his belief to the evidence.” That is reasonable. However, Hume goes on to conclude that the consideration of historical evidence for a miracle is pointless, as a matter of principle.

Hume’s article is quite long and I have by no means covered all of his arguments. I have only covered his central arguments.

In this article I have not attempted to prove that miracles do occur. My purpose has been more modest. I have only attempted to show that a historical argument for the occurrence of a miracle can potentially be sufficient to warrant belief. I believe my argument has shown that multiple attestations can in principle provide sufficient evidence to warrant belief in a miracle.

Thus I flatter myself that I have discovered an argument that will, if just, with the wise and learned, be an everlasting check against Hume’s objection to miracles, and consequently, will be useful as long as the world endures. 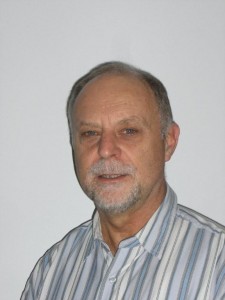